The more experienced Finnish team smashed their neighbours Sweden in the first ever full-contact women's national team game. Finland was ahead in every aspect of the game, and defeated the Swedes 64-0 (43-0). Sweden only managed a few first downs, whereas the home team didn't have to punt at all. 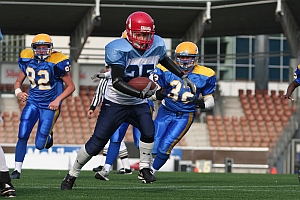 Finnish players already had a full season of full-contact football behind them in addition to years of flag football. The Swedes had much less experience of tackle football.

"The biggest difference was our speed. Our plays developed much faster. We also won the battle at the line of scrimmage", Finnish head coach Teemu Kuusisto said.

"Difference in experience could be seen in reading the plays and in hitting. But you still had to work hard against them", added center Mirva Honkonen. She was happy that Finland decided to switch from semi-contact to the full contact version. Although putting the pads on didn't change that much for the linemen.

"It was definitely the right decision to go to full-contact. In the line, there was already contact in the previous set of rules, but now it is easier to block, and you can use your body more."